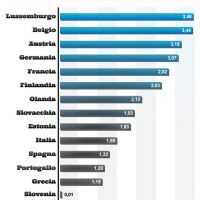 The cost of water in Italy is among the lowest in Europe, supports CENSIS in Issue 4 of the Diary of the Transition. It is also known that the quality of public water, despite national regulations, is very variable and locally very poor for high content of Calcium, Manganese, Iron, Vanadium, Magnesium, Selenium, Sulfates, Boron, Fluorides, Nitrates, organic compounds and also Arsenic.

Both Arsenic chemical forms are toxic to humans with effects that can be carcinogenic: Long exposure times can also cause skin or internal organs such as liver, colon, and brain. For this reason WHO, World Health Organization, has set a maximum tolerance limit of 10 μg / l.

Arsenic limit in public water in Italy was 50 μg / l, with the transposition of the European directive of Legislative Decree 31/2001, was reduced to 10 μg / l, but in many areas of our country arsenic is present in higher concentrations and adjusting below the limit is not / was simple and inexpensive. Requests for the derogation and increase of the limits requested by the Italian Government to the EU for Arsenic have been received 3 times and have been involved, for almost a decade, in Lazio, Campania, Tuscany, Umbria, Lombardy, Trentino Alto Adige. The increase in Arsenic limits in aqueduct waters has caused an abnormal legislative contradiction, given that no derogation has been made to the arsenic limit in groundwater of 10 μg / l as provided for in Table 2, Annex 5, Part IV of Legislative Decree 152/2006, ie the citizens of the Italian Regions involved in the derogation who have used or use the public water network with arsenic> 10 μg / l, downloading them to the ground, for example to irrigate, are technically responsible of potential contamination of soil and subsoil. Water poisoning, art. 439 of the Penal Code: “Anyone who poisoned […] before they are fit or distributed for consumption, is punished with imprisonment of not less than 15 years […]”: in short, the damage and mockery! Not to mention the pollution of the food chain: how many children of Viterbo or Cisterna di Latina have eaten bread or other food prepared with water and arsenic all these years?

The arsenic problem concerns many areas of the planet: it is naturally present in high concentrations in the subsoil in some areas, which would be useful to avoid the abstinence of water resources for drinking purposes. The last EU derogation was completed on 31 December 2012 and therefore in January 2013, the Mayors and Assessors of many Italian municipalities had to state that tap water was not drinkable due to the presence of arsenic in concentrations> 10 μg / l .

EU calls to Italy have allowed tens of millions of euros, including European funds, to be used to equip water dispensers with important purifiers dedicated to Arsenic abatement and finally Regione Lazio has announced that from 1 January 2015 60 de-arsenification plants in the Viterbo area have been put into operation and will allow the distribution of arsenic-free water in taps. We also hope for solutions for the other 36 territories reported in July 2014 by European Environment Commissioner Janez Potočnik and we hope above all that we can plan aquifership networks with well-mixed water resources to improve water quality and reduce depuration dependence.

The European Commission’s June 2014 Synthesis Report on Water Quality in the EU concludes with the following 5 points and highlights the importance of risk analysis as an effective parameter management and control instrument (there is no mention of European Water Standards):

1. the supply of high quality water, especially in remote and rural areas, needs to be improved. Small supplies that serve these areas require specific risk management methods, and it is necessary to study the role that the Drinking Water Directive can play in this regard;
2. the approaches to the management of large-scale risk-based supplies would allow for more cost-effective parametric analysis and analysis of the risks identified and would also offer better guarantees for the protection of human health. Control and analysis methods should reflect the latest scientific and technological developments;
3. new scientific information on the chemical and other parameters related to drinking water should be considered, in accordance with the revision of the WHO guidelines on drinking water, including emerging pollutants;
4. modern information technologies should be used and access to environmental information should be facilitated in order to provide consumers with a greater amount of up-to-date information and to examine how to link the various data obtained from controls to the preparation of reports and intended information consumers;
5. the implementation times and the expected derogation mechanisms are obsolete and would benefit from a general update and review operation.