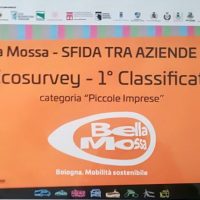 Ecosurvey has been recognized as the most sustainable company Bologna Bella Mossa 2017 ranked first in the Small Business category in the Bella Mossa 2017 program. BetterPoints – “Who Moves Well Is Awarded” – Accounts for Movements by Sustainable Media walk, bike, bus, train, car sharing and car pooling and sign up with the Beautiful App App for iOS and Android.

The competition, launched in April 2017 for 6 months, involved about 20,000 Bologna citizens and over a hundred companies, sponsors and companies participating in the competition divided into three categories:

The prizes were awarded by Tommaso Bonino of SRM Transport and Mobility Organizers of Bella Mossa 2017 and the Mobility Policy Expert, Irene Priolo, in the European Week of Sustainable Mobility Week 2017 promoted by the European Commission.

In addition, Ecosurvey® was awarded a sponsorship of the BICICULT event with a tribute delivered by Massimo Monti, a real bike-cult: BIANCHI SPILLO RUBINO.

Ecosurvey® as part of its Environmental Policy adheres to GIP Green Industry Platform [UNIDO] and is committed to protecting the environment through consulting, design and use of environmental practices based on the principles of the circular economy and the safeguarding of natural resources.