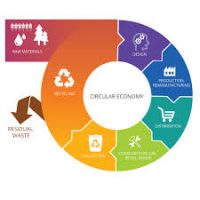 Aligned with the European Union philosophy is the so-called circular economy, which basically proposes action to “closing the loop” of product lifecycles through greater recycling and re-use, and bring benefits for both the environment and the economy.

The circular economy has been gaining position transversely in several policies and mechanism developed in Europe. One of this mechanism is the so-called Green Public Procurement (GPP). The definition, rules, and constraints of this initiative are declared by the European Union on the third edition of the document “Buying Green: a Handbook on green public procurement (2016)”. This initiative it’s considered as “a process whereby public authorities seek to procure goods, services and works with a reduced environmental impact throughout their lifecycle when compared to goods, services and works with the same primary function that would otherwise be procured.” This condition may modify and regulates the Government expenditure on works, goods, and services that represent around 14% of EU GDP, accounting for roughly EUR 1,8 trillion annually (European Commission (2015) Public Procurement Indicators 2013.)

On the other hand, the last report of the European Commission about the implementation of the Circular Economy Action Plan (2017) states the current condition of the application of the so-called circular economy package. This package covers the elements from production to consumption, repair and manufacturing, waste management and secondary raw materials that are fed back into the economy, with long-term targets to reduce landfilling and increase recycling and reuse.

Impact of the circular economy in Europe

One example of the impact of the circular economy on the formal European economy is the creation of job position. According to this report 120.000 jobs could be created thanks to recycling of bio-waste in organic-based fertilizers (taken as an example from several areas covered by the Circular Economy).

Continuing with the financial aspect, the just mentioned report about the implementation of the Circular Economy Action Plan (2017) of the European Commission, stated the launch of a platform which “join the European Investment Bank (EIB), financial market participants and businesses to increase awareness of the circular economy business logic and improve the uptake of circular economy projects by investors.”

The platform will have a three-pillar structure:

The European commission delivers on the “Environment” section of their “Eco-innovation Action Plan” the Eco-Innovation indicators which include both the benefits and disadvantages of eco-innovation activities. This can include jobs created or eliminated, changes in competitiveness, as well as turnover, revenues, profits and expenses of companies.

How big the eco-innovation and circular economy industries in different regions of the World?

Ellen MacArthur Foundation reports “Towards the Circular Economy “. Using product case studies and economy-wide analysis, this report details the potential for significant benefits across the EU and UK. It argues that a subset of the EU manufacturing sector could realize net materials cost savings worth up to $ 630 billion p.a. towards 2025—stimulating economic activity in the areas of product development, remanufacturing and refurbishment. They also show estimates of economic benefits of circularity measures in several industries.

This website uses cookies to improve your experience while you navigate through the website. Out of these, the cookies that are categorized as necessary are stored on your browser as they are essential for the working of basic functionalities of the website. We also use third-party cookies that help us analyze and understand how you use this website. These cookies will be stored in your browser only with your consent. You also have the option to opt-out of these cookies. But opting out of some of these cookies may affect your browsing experience.
Necessary Always Enabled
Necessary cookies are absolutely essential for the website to function properly. This category only includes cookies that ensures basic functionalities and security features of the website. These cookies do not store any personal information.
Non-necessary
Any cookies that may not be particularly necessary for the website to function and is used specifically to collect user personal data via analytics, ads, other embedded contents are termed as non-necessary cookies. It is mandatory to procure user consent prior to running these cookies on your website.
SAVE & ACCEPT